Bisbee, Arizona burns to the ground, on October 14th, 1908. Pictures and text from GenDisasters , posted by Linda Houston. 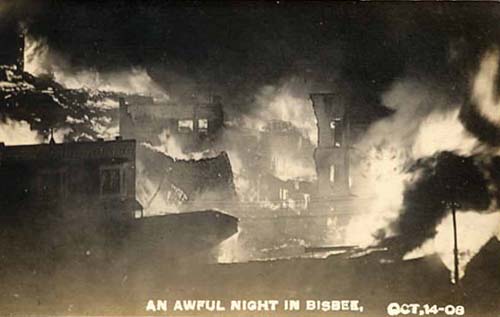 Many Large Business Houses Burn and Flames Jump Into Residence Part of Town.

SPECIAL TO THE NEWS.

The blaze started in the rear of the Grand Hotel, on upper Main street. This large wooden structure burned like tinder and the water pressure being low, the fire department could do nothing to stay its progress. Adjoining the Grand Hotel was a large livery stable which immediately took fire.

The heat was so intense it was impossible to get the fire apparatus near enough to adjoining buildings to be effective and the flames swept on without check, extending both up and down Main street on on the east side for two blocks. The fire finally reached the new brick building of Frankenberger & Newman, which together with its $45,000 stock of clothing, was completely destroyed.

From this point it jumped across Main street to the large grocery store of J. E. ANGUS, which was also completely destroyed. Advancing on Main street in the direction of Castle Rock, several small buildings were wiped out; also the splendid new building of the Elks.

Leaving the business section the fire swept over Clawson Hill, one of the best residential and business parts of the city. Here every dwelling was destroyed with the excepton of the HENKLE and CLAWSON residences.

resorted to and buildings were blown down in the path of the fire. The in a large measure saved the town from entire destruction. Loss $500,000. Insurance $150,000. 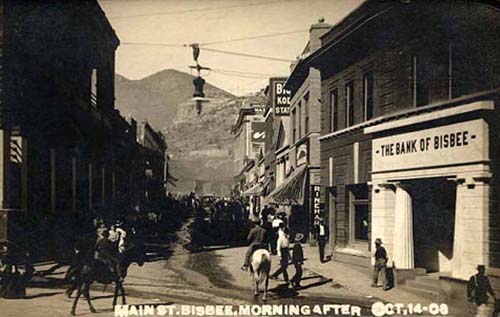 Funds Raised for Relief; Outside Aid Not Imperative-Amount of Loss Probably $750,000.

SPECIAL TO THE NEWS.

Bisbee, Ariz., Oct. 16.-Fire losses are now estimated at $750,000. Citizens of the camp have raised several thousand dollars for relief and have decided that outside assistance, of which there have been numerous offers, will not be necessary. Committees of prominent citizens, working with the Salvation Army, have provided shelter, food and clothing for 500 homeless people. None were without shelter the night following the fire and the situation is well in hand.

Many landlords having vacant houses have told the homeless to move in regardless of rent, while all rents have been lowered instead of raised.

Arrangements are already being made to rebuild practically all of the business houses destroyed in a more substantial manner. The residence section will also be rebuilt, but not so rapidly. Of the loss $200,000 is covered by insurance. Several of the business houses totally destroyed by the flames have already established temporary quarters, while others have stretched tents over the burned area and are conducting business from them. Members of the Salvation Army from Douglas, Tucson and El Paso are assisting in the relief of the sufferers. 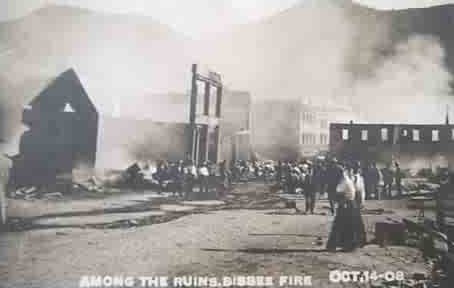