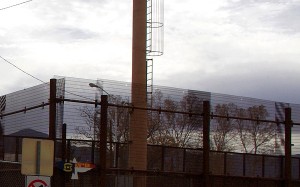 While many Arizonan Sheriffs claim crime along the border is an epidemic of violence and mayhem, the facts do not bear out the hysteria.

Karina Salazar of the Arizona-Sonora News Services, writes that: “Crime statistics from the FBI confirm that the drug violence occurring in Sonora is not spilling over into Arizona.

More from Ms. Salazar on border violence and security:

Three generations of Sotos have lived in Nogales, Sonora, and have watched the border change and evolve.

Marta Soto, now 45 and a resident of Nogales, remembers crossing from Sonora to Arizona as a kid in the back of her parents’ pickup truck. She remembers that once in Arizona, she could look behind her for a clear snapshot of the vibrant curio shops along the streets and the colorful homes slowly crawling up the hillsides on the Sonoran side.

Today, Soto’s view is obstructed by fear and politics. But she’s still looking, and she and other border residents, including people in law enforcement, say the border is safer than it’s ever been.

“The wall has changed, and the security has changed,” said Soto, who moves back and forth daily between Arizona and Sonora. “But it’s not this dangerous, violent place people have said it is. With a 10-foot metal wall and national troops around, it’s a bit different.”

The Arizona-Sonora border runs through desert and mountains from Chihuahua state to west of Nogales, Ariz. Since its establishment after the Gadsden Purchase of 1853, the border between the two countries has transformed from open land, to chain-link fences, to metal fences and barbed wire, and now to 10-foot metal barriers dug deep into the ground.

The border areas and its surrounding communities have experienced their greatest changes within the last decade, largely because of the ongoing drug violence in Mexico and a spiraling fear in the U.S. of spillover bloodshed and unfettered migration.

Since the murder of a rancher in Cochise County in March 2010, the claim that the border is flooded in blood and violence has intensified.

In a speech to the Senate in 2010, Sen. John McCain, R-Ariz., said, “The government’s failure to secure the border has led to violence — the worst I have ever seen.”

In a local television interview in July 2010, Arizona Gov. Jan Brewer said, “Our law enforcement agencies have found bodies in the desert either buried or just lying out there that have been beheaded.”

But for Soto, the border “is not what everyone is making it out to be. Our communities are as safe as they’ve ever been.”

A new study about the drug violence in Mexico from the Trans-Border Institute at the University of San Diego shows that 84 percent of drug-related homicides in 2010 occurred in four states: Baja California, Chihuahua, Sinaloa and Guerrero.

Sonora is one of the Mexican states that is least affected by the drug violence, according to figures compiled by the Mexican government. Sonora’s 495 killings in 2010 showed an increase from the last three years but were substantially lower than the 4,427 in Chihuahua, 1,815 in Sinaloa and 1,209 in Tamaulipas.

“There are hotspots with the same dangers you’ll encounter anywhere else,” Estrada said. “I think I would be reliable in saying that the city and county is relatively safe. This violence is among individual cartels.”

Crime statistics from the FBI confirm that the drug violence occurring in Sonora is not spilling over into Arizona.

As politicians keep pushing for more military to “secure the border,” a poll conducted by the Border Network for Human Rights in Texas found that more than 87 percent of people living along the U.S.-Mexico border feel safe.

The increase in personnel and new technology has significantly improved the safety of residents and the detection of illegal activity on the border, according to the Alliance to Combat Transnational Threats, a group of federal, state and local law enforcement agencies including Border Patrol, Immigration and Customs Enforcement, Drug Enforcement Administration, and sheriffs in Pima and Santa Cruz counties.

“You can’t walk one block without coming across a Border Patrol agent, a police officer or the sheriffs department,” Estrada said.

The number of Border Patrol personnel on the border has doubled from approximately 10,000 in 2004 to more than 20,700 in 2010 and is now greater than at any time in its history.

Although the number of law enforcement personnel has increased and the border wall gets taller and more impenetrable, Soto said that not much has changed about crossing the line since she was kid — except for longer lines and an obstructed view.

“It’s noticeable that both nations are taking the proper precautions and strategies to keep us safe,” she said. “It’s apparent through the extent of security you go through when crossing.

“Although I may not be able to sneak candy and clothing to my friends on the other side through the diamond holes in the metal border fence like I used to when I was a teenager, both Nogaleses continue to be one united and safe community.”