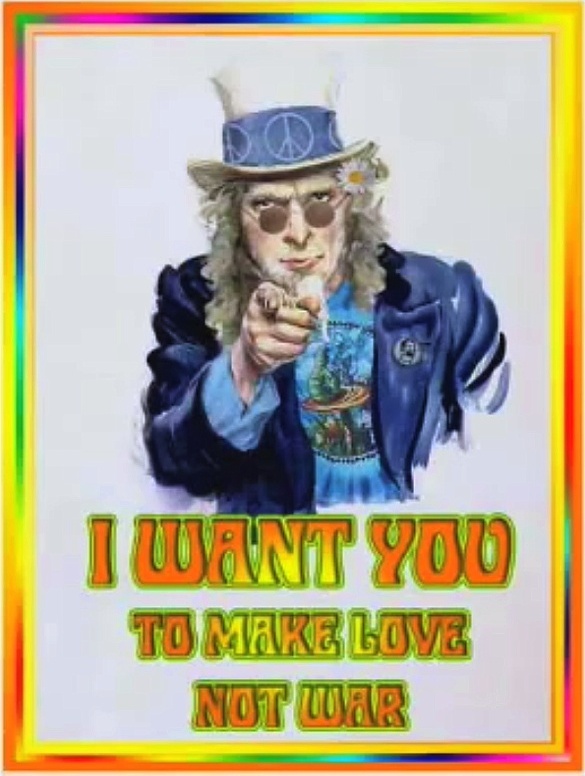 The Hippies were right, but that’s not what is important now. Doing what’s right is harder, than being right.

Our society is run by insane people for insane objectives. I think we’re being run by maniacs for maniacal ends and I think I’m liable to be put away as insane for expressing that.

There’s a black granite wall in Washington D.C. that bears 58,260 names on it. All of those whose names are carved on that wall are dead. For what? Freedom? If this country had listened when kids were screaming to stop that slaughter, that wall would have been one hell of a lot shorter. Yet we as a nation still wage wars of choice. War encouraged by pluotcrats. Peace is never discussed. Peace has somehow become a pejorative. Peace is no perjoritive. Peace is essential to the survival of the human race. Those who advocate for war are a dangerous and fearful group who should be marginalized and disavowed. War is always the last choice.

The dirty fucking hippies were right!

Now the oceans have been rising and warming. The polar ice is melting at alarming rates. The climate is changing in irreversible ways. Our survival as a species is on a precipice. The science on this is clear: Humans are now in trouble….. because of our reckless stewardship of what we dominate. We have polluted this fragile jewel that hangs in space. Our only home. The food we buy is contaminated. The toys we give our children as presents for christmas are tainted with poison. The water we drink is rife with carcinogens. The fish in our seas, lakes and rivers are so full of mercury that it is only recommended we eat them once per week. We have now come face to face with our own extinction. I hate to say we told you so, but…

the dirty fucking hippies… were right!

We’ve elected sociopath after sociopath for the last 30 years, to every level of government. Many of them slaves to corporate parasites that gorge themselves at the public trough while the most vulnerable people in our society: the sick, the young, and the elderly go wanting. Billions of dollars in profits are being snitched up at the expense and suffering of our neighbors by the jackals that comprise our pharrmacutical companies and insurance companies.

Both of which pipe their diagnostic wisdom and their faux concern right into our homes via teevee and radio commercials. These legal drug dealers now sell their wares with impunity and the insurance gamblers perform a slick game of 3 card monty right in our living rooms. Most of these drugs have a list of caveats that would make even the most dishonest used car salesman blush. And the insurance hustlers change the rules of the game when it’s time for them to pay up.

Profiting from the suffering and pain of others. Profiting from human frailty. Universal Healthcare? Too expensive, we were told. Gasbag talking heads on teevee and radio have been complicit in this deception while being handsomely compensated for their assistance.

I’ll say it again:
The dirty fucking hippies… were right!

Big Box discount stores descend upon small towns in America like alien ships filled with cheap products, bought at low prices, from countries that pay their workers slave wages. Plutocrats love this business model. Mom and Pop shops can’t compete with the prices set by these huge corporate parasites. and to no one’s surprise many small businesses in these tiny hamlets fail. Leaving small towns filled with empty store fronts and even in some cases forcing these former small business operators to go to work for the very people that ruined their livelyhoods. Small town America is subsequently decimated by this invasion. Often helpless in stopping it.

Wall Street has cannibalized itself. Still hungry, feeling the pangs of their greed, they’ve now come to the government for their daily meal. And still, without a hint of irony, a spokesman for this ravenous tribe, mounts a soapbox and has the temerity to rail against the evils of socialism. Turns out, the socialism is for them, the capitalism is for us. Abbie Hoffman once baited these bansters by throwing cash onto the floor of the NYSE.

To no one’s astonishment, they demonstrated their insatiable greed. The gluttons couldn’t help themselves, they stopped trading and got on their knees to sweep up the free loot. Wall Street should have been reigned in long ago.

The dirty fucking hippies… were right!