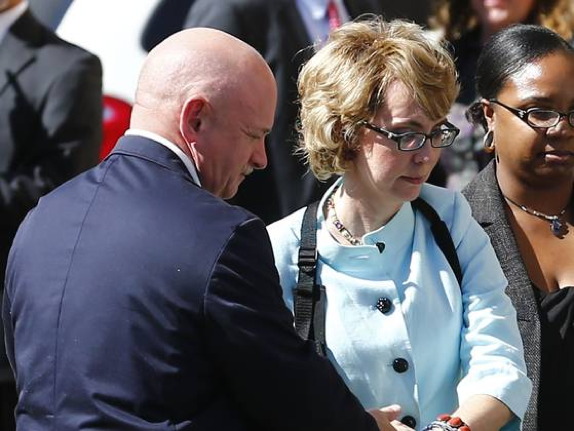 Two years ago, a mentally ill young man shot me in the head, killed six of my constituents, and wounded 12 others. Since that terrible day, America has seen 11 more mass shootings but no response from Congress to prevent gun violence. After the massacre of 20 children and six of their teachers at Sandy Hook Elementary though, it’s clear: This time must be different.

Americans for Responsible Solutions will encourage elected officials to stand up for solutions to prevent gun violence and protect responsible gun ownership by communicating directly with the constituents that elect them.

Join us today, and tell your elected leaders that Americans are demanding responsible solutions to reduce gun violence.

Please take a moment to read our op-ed.

In response to a horrific series of shootings that has sown terror in our communities, victimized tens of thousands of Americans, and left one of its own bleeding and near death in a Tucson parking lot, Congress has done something quite extraordinary – nothing at all.

I was shot in the head while meeting with constituents two years ago today. Since then, my extensive rehabilitation has brought excitement and gratitude to our family. But time and time again, our joy has been diminished by new, all too familiar images of death on television: the breaking news alert, stunned witnesses blinking away tears over unspeakable carnage, another community in mourning. America has seen an astounding 11 mass shootings since a madman used a semiautomatic pistol with an extended ammunition clip to shoot me and kill six others. Gun violence kills more than 30,000 Americans annually.

This country is known for using its determination and ingenuity to solve problems, big and small. Wise policy has conquered disease, protected us from dangerous products and substances, and made transportation safer. But when it comes to protecting our communities from gun violence, we’re not even trying – and for the worst of reasons.

Special interests purporting to represent gun owners but really advancing the interests of an ideological fringe have used big money and influence to cow Congress into submission. Rather than working to find the balance between our rights and the regulation of a dangerous product, these groups have cast simple protections for our communities as existential threats to individual liberties. Rather than conducting a dialogue, they threaten those who divert from their orthodoxy with political extinction.

As a result, we are more vulnerable to gun violence. Weapons designed for the battlefield have a home in our streets. Criminals and the mentally ill can easily purchase guns by avoiding background checks. Firearm accessories designed for killing at a high rate are legal and widely available. And gun owners are less responsible for the misuse of their weapons than they are for their automobiles.

Forget the boogeyman of big, bad government coming to dispossess you of your firearms. As a Western woman and a Persian Gulf War combat veteran who have exercised our Second Amendment rights, we don’t want to take away your guns any more than we want to give up the two guns we have locked in a safe at home. What we do want is what the majority of NRA members and other Americans want: responsible changes in our laws to require responsible gun ownership and reduce gun violence.

We saw from the NRA leadership’s defiant and unsympathetic response to the Newtown, Conn., massacre that winning even the most common-sense reforms will require a fight. But whether it has been in campaigns or in Congress, in combat or in space, fighting for what we believe in has always been what we do.

Let’s not be naive

We can’t be naive about what it will take to achieve the most common-sense solutions. We can’t just hope that the last shooting tragedy will prevent the next. Achieving reforms to reduce gun violence and prevent mass shootings will mean matching gun lobbyists in their reach and resources.

Americans for Responsible Solutions, which we are launching today, will invite people from around the country to join a national conversation about gun violence prevention, will raise the funds necessary to balance the influence of the gun lobby, and will line up squarely behind leaders who will stand up for what’s right.

Until now, the gun lobby’s political contributions, advertising and lobbying have dwarfed spending from anti-gun violence groups. No longer. With Americans for Responsible Solutions engaging millions of people about ways to reduce gun violence and funding political activity nationwide, legislators will no longer have reason to fear the gun lobby. Other efforts such as improving mental health care and opposing illegal guns are essential, but as gun owners and survivors of gun violence, we have a unique message for Americans.

We have experienced too much death and hurt to remain idle. Our response to the Newtown massacre must consist of more than regret, sorrow and condolence. The children of Sandy Hook Elementary School and all victims of gun violence deserve fellow citizens and leaders who have the will to prevent gun violence in the future.

Gabrielle Giffords is the former Democratic U.S. representative from Arizona. Her husband, Mark Kelly, is a former astronaut.