On the morning of July 12th, 1917, a well armed band of vigilantes and lawmen rounded up and deported over one thousand members and sympathizers of the International Workers of the World, known as the IWW. Its members favored worker owned and operated industries, and proposed to abolish wages, while controlling industrial production through labor councils.

Cochise County Sheriff Harry Wheeler met with Phelps Dodge officials, and secretly organized a round-up of strikers and sympathizers within two local groups: the Citizen’s Protective League, and the Worker’s Loyalty League. Their members supported the mining companies, while distrusting the IWW’s growing support among Mexican and other foreign workers. These photos are from the Walter Reuther Library, and the University of Arizona’s Bisbee Deportation Collection.

END_OF_DOCUMENT_TOKEN_TO_BE_REPLACED

A traveling writer, George Wharton James, wrote about Bisbee, Arizona in 1917, in a book called Arizona the Wonderland. This book is available from Google books. The following is an excerpt on Bisbee in 1917:

BISBEE, THE COPPER MINING CITY OF THE SOUTH

Why they called them the Mule Mountains no one knows, yet it so denominated in the bond — on the United States maps, and when the camp was first located, the settlement that sprang up around it was called Mule Gulch; and near by was Mule Pass.

END_OF_DOCUMENT_TOKEN_TO_BE_REPLACED

In 1908, Bisbee had three daily newspapers: the Bisbee Daily Review, the Bisbee Evening Ore and the Daily Square Dealer. Bisbee was modern and wealthy, compared to other communities in the West.

Bisbee once had a Chinese community of workers that could work by day, but would be required by law to stay inside at night. These laws were common throughout Arizona and the West.

In 1908, Bisbee High’s Copper Chronicle was three years old. This excerpt is from The Story of Arizona, by Will H. Robinson. This book is available from Google Books:

END_OF_DOCUMENT_TOKEN_TO_BE_REPLACED 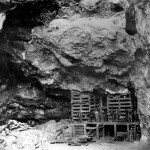 Bisbee, Arizona is notable for many curiosities and tall tales, and Bisbee folks have often found themselves “between a rock and a hard place.” This phrase originates in Bisbee, and has its beginnings in the labor struggles of the early twentieth century. The phrase described the circumstances of the workers of Bisbee, who were both fighting the local mining companies, while trying to survive with their families.