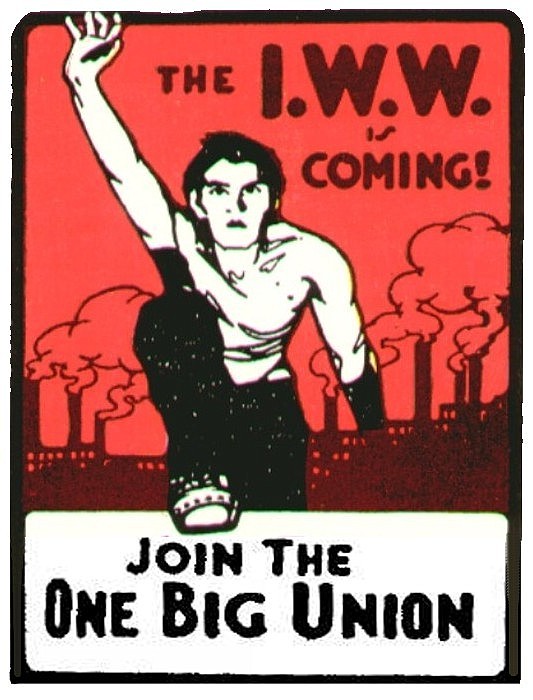 Once upon a time in Bisbee, miners and sympathizers were forcibly evicted by a conspiracy of lawmen, businessmen and ‘good Masons’ who met and planned the violent deportation at the Masonic Hall, which is now the Bisbee Mining and Historical Society.

Are you patriotic, a ‘good mason‘, or are you a bit wobbly? In Bisbee, this choice mattered enough to be asked at the point of a gun.

George Medigovich wrote the following account of the conspiracy in 1979. The Medigovich Building still stands on Brewery Gulch. George was a businessman who owned property with his family in Bisbee.

George contradicts himself, saying the involvement of businesses in the deportation was “to a minor extent, if at all,’ while relating that the second meeting “was made of business and professional men.”

Both the Freemasons and the International Workers of the World still exist as organizations, and both have fought for what we know to be Bisbee.

You can even belong to both organizations and spy on their meetings for the Sheriff of Cochise County. It’s all a part of Bisbee’s rich history. 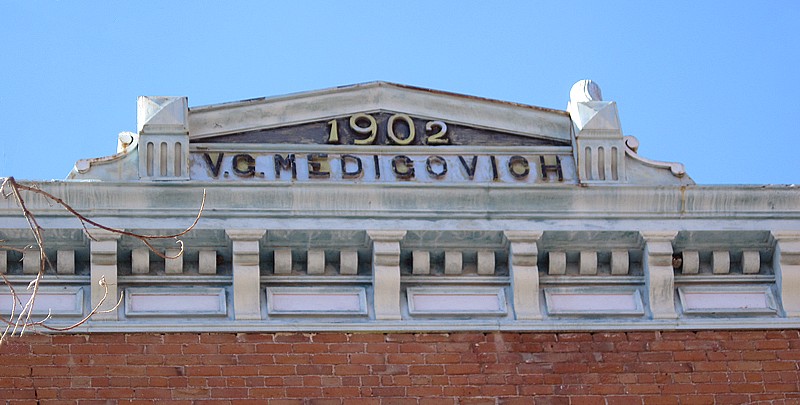 …You ask whether the business and professional men were involved in the deportation. In the actual roundup my guess is (and observation) to a very minor extent, if at all. I have remembered it as a very stunning and bizarre event. During the tension buildup of the strike, I, on invitation, attended two meetings at the Masonic Hall.

The second one on the afternoon of the day before the event. Much was said about the importance of copper to our war effort, the lawlessness and unpatriotic attitudes of the Wobblies, there were too many loyal miners and before losing the strike, the few Wobblies would execute their threats to blow up the mines. To save the mines (or Bisbee?) immediate deportation was the only solution. The gathering not too large, was made of business and professional men. (I can’t recall if the Masonic doors had been open for the Knights of Columbus). The audience had come only to learn, but a great moment in my own history, I well remember, as the meeting was about to break up and without being told that the deportation was to be on the marrow I rose at an opening chance to place a suggestion before the chair. I don’t remember whether I had an inspiration of fresh youth in strategy how best to send them on their way, or whether I spoke as a “good Mason”.

Whatever I unloaded was to the embarrassment of the chair and the promptness with which he shut me up to my everlasting chagrin. The other thing that I well remember is what was said of Harry Wheeler. He was extolled as a sheriff as a man of character but highly independent, one who had not taken sides in the strike and it was very uncertain how he would cope or countenance a deportation.

In my boyhood Harry Wheeler was a legendary person — a Texas Ranger — when a bad gunman was alighting from the train at Benson he espied Harry Wheeler waiting for him, shots were exchanged, both went down, bystanders rush to Wheeler’s aid and they were told “take care of him, he is hurt worst.” Always on the right side.

In the Masonic Hall meeting the Chairman stressed the importance of Wheeler’s decision, a decision definitely in the balance. I was sure Harry would make it on his own, and likely one of aloofness from persuasion. I was sure he would weigh the matter carefully and likely look the other way from his office. I think it was still in Tombstone. I was rather surprised to see him ride by the next mid-morning when the roundup had been completed in an open car with a machine gun resting on the clustered top and Harry standing upright in the back seat alone.

The importance and meaning of Masonry in those days is very illusive to grasp today. To hold the meetings in their building was a matter of prestige, the right people were behind it, and certain of results. The highest compliment, “a good Mason” was the highest praise. At the time of the meeting it never occurred to me that I could be attending as a merchant but as a Mason.

The morning of the roundup I was up as usual to start, 6 A.M., to start my daily solicitation of my eleven boarding houses and cafes who served the miners. I found the exciting roundup peacefully in process – groups being taken by armed men to the depot for assembling at the Ball Park at Warren. Soon Mike Cunningham appeared with a rifle in hand. We spent the next hour or so idly in the small plaza between the old depot and the P.D. offices and the Medigovich property. In time we learned that the deportees were being loaded from the ball park for shipment, deportation.

It is amazing how smoothly the roundup and shipment was executed. As well planned and executed as Ike invading Lebanon and quelling another bunch of commies. I am sure that only the minimum were privy to the whole process, organizing, deputizing each raiding squad. I doubt if many at the Masonic hall meetings were involved other than to be briefed. It is a murky residue to squeeze a 62 year sponge of memory. I think superficially the camp bounced back to normal in a few days except that my own future and life time deportation came in less than two months (except the Uncle Sam bankrolled my exodus) the first contingence of the first draft – Sept. 1917, uprooted me.

You must not draw such a fine line between “bankrolling” and “ownership”. Dr. Douglas, (P.D.) entered the railroad business once the Southern Pacific began charging “what the traffic could bear,” and thereby hogging a lot of the profits – he built the line to Benson in 1889 and then to Deming to hook up with the Santa Fe and then to El Paso to tie in with the Rock Island – he called the system, El Paso & Southwestern.

I would have been a treat to listen in on Felix Frankfurter reporting back to Woodrow Wilson after his trip to Bisbee and saying “the only way we can stop those lawless bastards out there is to enact a federal kidnapping law.”

That morning as Mike Cunningham and I loitered about the Plaza (he must have been anxious to team up, (with rifle in hand) with someone up to then I relationship was limited to no more than a salutation in passing.

I saw a friend and a good customer being marched off in a pack of deportees. He operated a chili con carne sidewalk stand on the Gulch, the best and hottest bowl of chili west of the Rio Grande. He was a young Serbian, spent his youth in restaurant kitchens, devoted to my mother — very likely she had helped him along the way. I rushed over to him. I said something about his not belonging in the roundup and I asked how it happened – when he was asked about carrying a wobbly card he told them to go to hell, when I told him I could get him released he just gave me a mean look and went off – I never saw him again. I often wondered how many other were like him; but, keep in mind one can never be sure what may come out of the Balkans – Chris was a stubborn bohunk.

I read Mr. Houston’s article with much pleasure, his rich facility and style should produce a good novel, maybe not for you and me. A little of the truth as we remember it can do much harm to a lot of good fiction. He doesn’t run the risk of “estranging his boyhood friends” in the manner of Bernard Deboto; and all of the old timers are gone.

I hope you don’t find this letter too boring and long. I am sorry to be so uninformed about 1917. Bisbee was an ideal place to mature slowly. A young grocer concentrating on getting more business; labor movements, wobblies, books, Bisbee Daily Review, the library, P.D., involvements were no part of my life. The tips of the Mule Mountains were my horizons, the end of the world, where the EP&SW had either to back in or back out, the P.D. a kind and generous Mother India who was most gentle and helpful in my mother’s prosperity. She in turn always most appreciative, and agreeable. She and Father traded properties with Walter Douglas about the time P.D. built the Copper Queen Hotel so the street could be relocated to run straight down the hill. My parents owned the property on both sides of the street when it was located further east with a wide curve in it. The street should have been called Medigovich Putnick (road traveler). I told you the Slavs were taking over. This was one chance the (sic) missed.

I remarked Bisbee was a wonderful place to mature slowly – with my hunting, “Buttons” my quarter horse, a little Kelly pool, a bit of poker, the gulch, I was well prepared to enter first the army and them Columbia in an unprecedented pristine condition.