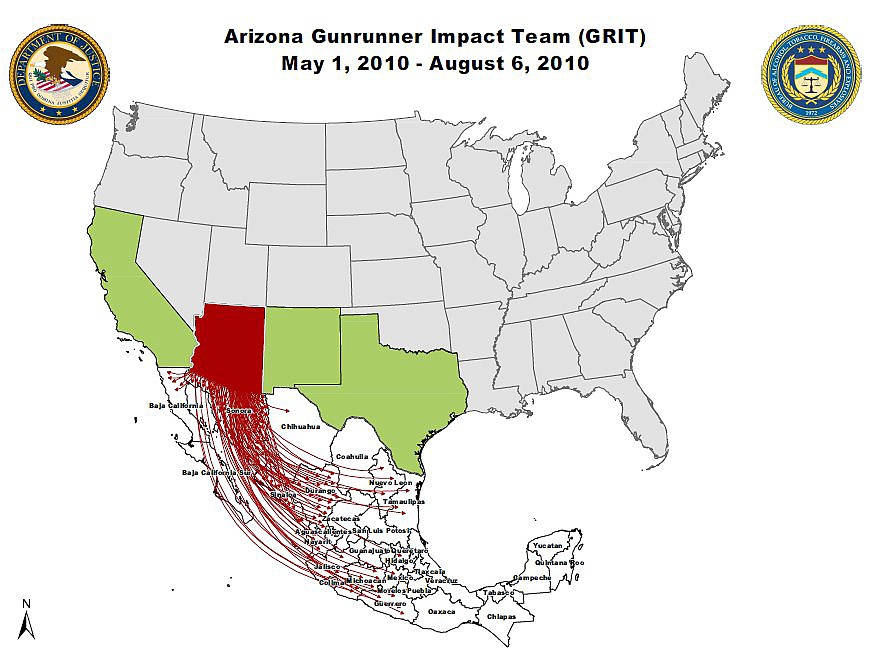 Imagine ATF administrators and agents brainstorming catch phrases to describe an operation that proliferates hundreds of heavy weapons into Mexico to expand the Drug War. These ATF creatives  have shortened the tough ‘Gunrunner Impact Team’ into the rugged acronym GRIT. Imagine an ATF agent drawing Arizona in red ink with PowerPoint arrows piercing Mexico with dozens of lines indicating a ‘surge’ of weapons, soon followed by death and mayhem.  The creative public relations wizards that coined GRIT, also came up with Hollywood style themes to describe their surge of weapons onto Mexican streets. First ‘Operation Gunrunner’, improving to ‘Fast and Furious’, then  ‘Wide Receiver’  and the ‘ATF’s GRIT Surge’.

[UPDATE] ‘Wide Receiver’ was a guns to Mexico scheme that began in the ATF under the Bush Administration.

A Chart of blood red tracks  obtained from CBS News indicates the rivers of blood that flow from the hundreds of ATF guns that ‘walked.’ Bureau of Alcohol, Tobacco, Firearms and Explosives (ATF) Phoenix Field Division Special Agent William Newell wrote this to his personal friend, Kevin M. O’Reilly of the White House National Security Staff:

The White House counsel who produced the documents stated that some records were not included because of “significant confidentiality interests.” 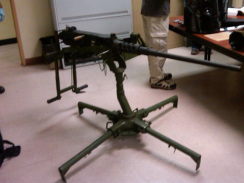 Also included are email photographs including images of a .50 caliber rifle (left) that Newell tells O’Reilly “was purchased in Tucson, Arizona (part of another OCDTF case).” OCDTF is a joint task force that operates under the Department of Justice and includes the US Attorneys, ATF, DEA, FBI, ICE and IRS. Fast and Furious was an OCDTF case.

An administration source would not describe the Tucson OCDTF case. However, CBS News has learned that ATF’s Phoenix office led an operation out of Tucson called “Wide Receiver.” Sources claim ATF allowed guns to “walk” in that operation, much like Fast and Furious.

Congressional investigators for Republicans Rep. Darrell Issa (R-CA) and Sen. Charles Grassley (R-Iowa) have asked to interview O’Reilly by September 30. But the Administration informed them that O’Reilly is on assignment for the State Department in Iraq and unavailable.

One administration source says White House national security staffers were “briefed on the toplines of ongoing federal efforts, but nobody in White House knew about the investigative tactics being used in the operation, let alone any decision to let guns walk.”

And this interesting exchange:

Have we gotten any readout on ATF’s GRIT surge in Phoenix & in Arizona?

Sure, just don’t want ATF HQ to find out, especially since this is what they should be doing (briefing you)!

So now we know that there was a ‘surge’ of guns and materiel to Mexico, and that Bill Newell was stove-piping the information to an NSS operative in the White House, and providing below the surface briefings without ATF HQ knowing or approving this.

This is how you escalate the violence of the drug war, and is this how you insure that alcohol, tobacco and firearms will remain regulated legal commerce, while marijuana continues to be a killer weed enforced with ATF supplied machine guns. It takes a lot of firepower to make marijuana lethal. Its pretty harmless unless you get smoked by a Gun Walker. Border Patrol Agent Brian Terry got smoked.