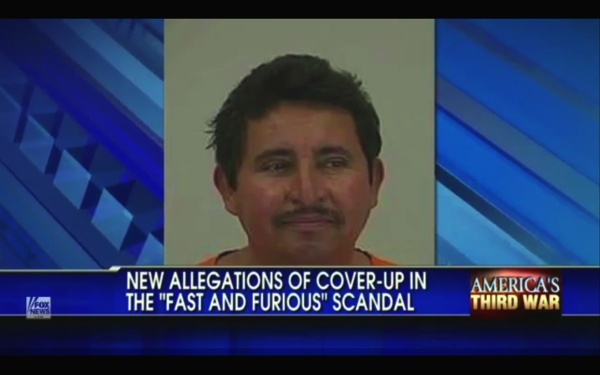 Allegations that there was a third gun found at Border Patrol Agent Brian Terry’s murder have surfaced, bring more questions about the facts surrounding the firefight in Arivaca last year.

Sources say emails support their contention that the FBI concealed evidence to protect a confidential informant. Sources close to the Terry case say the FBI informant works inside a major Mexican cartel and provided the money to obtain the weapons used to kill Terry.

Unlike the two AK-style assault weapons found at the scene, the third weapon could more easily be linked to the informant. To prevent that from happening, sources say, the third gun “disappeared.”

This is the video of the Fox News report:

…In another email, deputy ATF-Phoenix director George Gillett asks: “Are those two (AK-47s) in addition to the gun already recovered this morning?”

The two AK-type assault rifles were purchased by Jaime Avila from the Lone Wolf Trading Co. outside of Phoenix on Jan. 16, 2010. Avila was recruited by his roommate Uriel Patino. Patino, according to sources, received $70,000 in “seed money” from the FBI informant late in 2009 to buy guns for the cartel.

According to a memo from Assistant U.S. Attorney Emory Hurley, who oversaw the operation, Avila began purchasing firearms in November 2009, shortly after Patino, who ultimately purchased more than 600 guns and became the largest buyer of guns in Operation Fast and Furious.

Months ago, congressional investigators developed information that both the FBI and DEA not only knew about the failed gun operation, but that they may be complicit in it. House Government Reform and Oversight Committee Chairman Darrell Issa, R-Calif., and Sen. Charles Grassley, R-Iowa, fired off letters in July requesting specific details from FBI director Robert Mueller and Drug Enforcement Administration chief Michele Leonhart.

“In recent weeks, we have learned of the possible involvement of paid FBI informants in Operation Fast and Furious,” Issa and Grassley wrote to Mueller. “Specifically, at least one individual who is allegedly an FBI informant might have been in communication with, and was perhaps even conspiring with, at least one suspect whom ATF was monitoring.”

Sources say the FBI is using the informants in a national security investigation. The men were allegedly debriefed by the FBI at a safe house in New Mexico last year.

Sources say the informants previously worked for the DEA and U.S. Marshall’s Office but their contracts were terminated because the men were “stone-cold killers.” The FBI however stopped their scheduled deportation because their high ranks within the cartel were useful.

In their July letter, Issa and Grassley asked Mueller if any of those informants were ever deported by the DEA or any other law enforcement entity and how they were repatriated.

Asked about the content of the emails, a former federal prosecutor who viewed them expressed shock.

“I have never seen anything like this. I can see the FBI may have an informant involved but I can’t see them tampering with evidence. If this is all accurate, I’m stunned,” the former prosecutor said.

“This information confirms what our sources were saying all along — that the FBI was covering up the true circumstances of the murder of Brian Terry,” added Mike Vanderboegh, an authority on the Fast and Furious investigation who runs a whistleblower website called Sipsey Street.

“It also confirms that the FBI was at least as culpable, and perhaps more culpable, than the ATF in the (Fast and Furious) scandal, and that there was some guiding hand above both these agencies (and the other agencies involved) coordinating the larger operation,” Vanderboegh said….

The FBI denies a third gun was found:

Meanwhile, questions continued to mount Wednesday over whether a third gun — not part of the “Fast and Furious” investigation — may have been found at the murder scene. Some critics have used word of a third weapon to accuse the federal government of covering up evidence in the case.

An FBI spokesman insists reports of a third weapon are “false,” stating emphatically, “There is no third gun.” And Newell’s attorney, Paul Pelletier, who recently left the Justice Department for private practice, said he has access to case materials, and there were only two guns found at the murder scene.

The report released in June by Issa and Grassley stated a third weapon was recovered at the scene. In emails Tuesday and Wednesday, a Grassley spokeswoman said her office obtained information of a third weapon from Terry’s family, who was told of it by a Border Patrol agent at Terry’s funeral. They also learned of a third weapon from newly disclosed recordings of conversations between an ATF agent and an Arizona gun dealer referencing an SKS rifle, and “other documentation.”

In those newly disclosed recordings, the ATF noted that “all [she] can go by is what” the FBI told her. Pelletier, now with Mintz Levin in Washington, said he believes he knows the origin of the three-gun “misperception.” He said the FBI originally identified one of the two guns recovered as an SKS, made in China.

After ATF agents traced the guns’ serial numbers back to “Fast and Furious,” they knew that both guns were in fact AK-47s from Romania. Some FBI officials, though, kept referring to an SKS, causing “initial confusion” and leading others to believe there was an SKS in addition to the two AK-47s, according to Pelletier.

Grassley’s spokeswoman was skeptical of such an explanation, noting that it would seem “difficult to misidentify one of the AK guns, since they would be identical.” And, she said, the ATF agent in the recordings said the third weapon had been traced to Texas, not Arizona….