Congressman Ron Barber, newly elected to Congressional District 8, has voted with most Republicans to find US Attorney General Eric Holder in 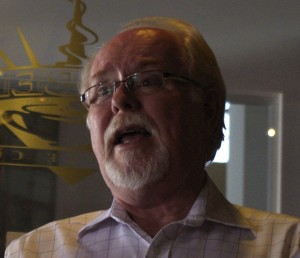 contempt of Congress for refusing to release documents demanded by the House Committee on Oversight and Government Reform. Congressman Ron Barber’s statement:

First of all, it should never be the policy of the US government to allow firearms to be smuggled into Mexico. A program such as Operation Fast and Furious should never have been approved and must never happen again. There clearly was inadequate oversight that allowed American weapons to fall into the hands of violent Mexican criminals and drug cartel members.

Now we must focus on finding solutions to the problems facing communities on the border. That means taking firm and quick action against the cartels and stopping the flow of drugs and violence into our country.

It also means having a real discussion, with specifics, about how to stop cartel members from coming to my home state of Arizona to buy guns and then turning those guns on our courageous law enforcement and Border Patrol personnel. These brave men and women deserve sound policy decisions.

We must give first priority to protecting the lives of men such as Border Patrol Agent Brian Terry, who routinely make enormous sacrifices for our country. Agent Terry made the ultimate sacrifice. Nothing we can do going forward can bring him back. But he and his family deserve to know what happened and who is responsible.

To have this discussion, and to find these solutions, we must put partisanship aside and work together. Today’s vote to hold Attorney General Eric Holder in criminal contempt is in direct opposition to that goal and does nothing to further the investigation into Operation Fast and Furious.

Today’s vote to allow Congress to go to court to resolve this issue is warranted. The administration should share the requested documents with Congress and action in federal court is a prudent way to remove this critical law enforcement debate from the realm of politics.

Brian Terry and his family deserve better than a partisan fight based on election year politicking. They deserve answers to their questions about his death.

Just as I am disturbed by the application of executive privilege to withhold documents from Congress, I am equally disturbed that the 16-month investigation conducted by the House Committee on Oversight and Government Reform appeared to be a partisan undertaking, in which requests by minority members for witnesses and hearings were rejected. I am dedicated to working across party lines for solutions, not deepening partisan divides.

Congress must get to the bottom of what happened with Operation Fast and Furious.