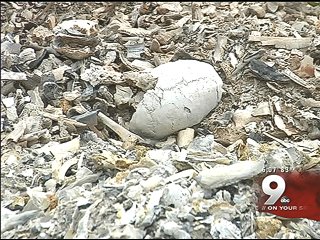 Where poor people and other lost bones come to rest: Bisbee Memorial Gardens. When skull parts and other disturbing bones were found dumped like trash, the local police determined that no laws had been broken, as poor taste is not a crime.

…It’s hard not to find the sight disturbing. Long told Nuñez that it certainly has that effect on him. “It’s one of those things you catch yourself staring at. You can’t really explain it but you keep staring at it in disbelief.”

According to Long, the Medical Examiner’s office determined the bones are human remains. But because the cremation process compromised the DNA, there is no way to establish whose bones are lying there.

As disturbing and unsettling as the sight may be, this does not appear to be a case of misplaced ashes. Bisbee Police tell 9 On Your Side that the remains came from a medical research company, which sent the bodies or body parts to the cemetery owner for disposal…