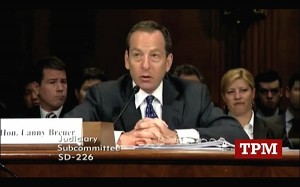 The emails, regrets and testimony regarding ATF gunwalking scandals, known as ‘Fast and Furious’ (the Blame Obama version), and ‘Operation Wide Receiver’ (Blame Bush version) have begun to provide details of a longterm policy to allow firearms to proliferate into Mexico.*

UPDATE- According to new evidence released, Mexico was briefed and participated in some of the ‘gunwalking’ capers. From the latest Borderland Beat:

“Mexico and the U.S. agreed, at least since 2007, to conduct joint operations traffic “control” of weapons to try to identify and dismantle smuggling networks that have given enormous power of fire to the cartels, reveals information from the Office Alcohol Control, Tabacco, Firearms and Explosives (ATF, for its acronym in English) in Mexico City.

It is clear from memos and emails to those who had access at El Universal, joint operations date back to 2007 when the then Attorney General of the Republic, Eduardo Medina Mora, had been briefed on the details of the operations by adding of the ATF.

“The addition of the ATF in the city of Mexico has reported to the procurator (Eduardo) Medina Mora this controlled delivery attempt, and emphasized the importance of a group of certified agents,” he said in a report prepared for the former attorney of the United States, Michael Mukasey, in November 2007.

Medina Mora, Mexico’s ambassador to the UK, denied authorizing the entry of weapons into the country.

He explained that since his appointment in office-in 2006 – had meetings with attorneys from the United States, where “they discussed many issues, many schemes of cooperation, but I can assure you that at no time explicitly discussed the possibility or the authorization with respect to any controlled delivery operation of weapons, “he told Radio Formula.

“I have no recollection, and I remember, I assure you, if that issue had been addressed,” the former official said.

However, he said that such a program “never has been allowed because it was totally out of the logic of the pursuit of intelligence information to build cases against people accused based on the crime involved.”

In the report, prepared during the administration of George W. Bush stated: “Recently, the ATF has worked together with Mexico in an attempt, for the first time a delivery of arms control.”

However, in an email sent by Carson Carroll, ATF official, then deputy director for field operations, is in doubt which was the first time: “We have already walked weapons to Mexico.”

There are theories that these guns were permitted to arm the Sinaloan cartel, yet no evidence has surfaced supporting this. These weapons are easy to obtain in the US, but possession of even a bullet will guarantee a prison term in Mexico.

TPMMuckraker’s Ryan J. Reilly has reviewed documents  released that show a long term policy that permits guns to be smuggled into Mexico to arm drug gangs, or honest sportsmen:

“A high-ranking Justice Department official was “stunned” when he learned in 2010 that agents with the Bureau of Alcohol, Tobacco, Firearms and Explosives (ATF) allowed weapons to “walk” across the Mexican border during the Bush administration, according to recently disclosed documents.

Documents show that Deputy Assistant Attorney General Jason Weinstein, a career federal prosecutor in a leadership position within the Obama DOJ’s Criminal Division, and other officials worked to keep the attention of the press away from the Bush-era “gun walking” tactics long before the problems with Operation Fast and Furious went public.

“Been thinking more about ‘Wide Receiver I’,” Weinstein wrote in an email on April 12, 2010. “ATF HQ [headquarters] should/will be embarrassed that they let this many guys walk — I’m stunned, based on what we’ve had to do to make sure not even a single operable weapon walked in [undercover] operations I’ve been involved in planning — and there will be press about that.”

Weinstein later planned a meeting with ATF officials and public relations officials in the Justice Department’s Office of Public Affairs to discuss the impending indictment in the Wide Receiver case that “has some rather significant (and I hope unique) press challenges.”

Following the meeting, Weinstein related in an April 28, 2010 email that they thought it would be better to announce the Operation Wide Receiver indictments as part of a larger announcement so as to focus on “aggregate seizures and not on particulars of any one indictment.”

The emails were included in 652 pages of documents that DOJ officials sent to Oversight Committee Chairman Rep. Darrell Issa (R-CA) and other officials on Monday in response to his Oct. 11 subpoena. Senior Justice Department officials provided TPM and other media outlets with selections from the documents they sent to Capitol Hill and briefed reporters on their contents…”

U.S. Attorney Lanny Breuer regrets not informing his Department of Justice colleagues about the Bush era ‘gunwalking’ that allowed US criminals and/or operatives to flood Mexico with firearms.

Continuity of government sometimes means saying sorry, while ‘looking forward’ means no one will be indicted or really censured beyond admitting that ‘mistakes were made.’ This is an act of bipartisan contrition, as Lanny Breuer monitored the Arms for Drugs during both Bush and Obama administrations.

It takes tons of firearms to enforce illegal marijuana. It takes a bit of compassion and empathy to enforce medical

marijuana programs that reduce suffering. Would you rather have marijuana regulated by the DEA, the ATF and the drug cartels, or your hometown doctor?

← Cochise County’s Representation Could be Split in Redistricting
Bill of Rights Permit for Assembly, Petitions, and Free Speech →