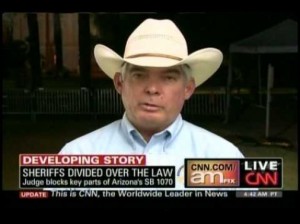 Cochise County Sheriff Larry Dever is considered one of the Top 10 toughest immigration sheriffs in the whole dang United States.

An informal poll by Fox News chose five of the top ten toughest sheriffs from Arizona’s ranks. Wyatt Earp should have made the list, but he was never an Arizona Sheriff.

An Arizona native and 34-year Cochise County law enforcement veteran, Larry Dever, left, emerged with Arpaio and Babeu, right, as the most vocal supporters of Arizona’s immigration bill before it became law. The three have since been named as defendants in a lawsuit involving S.B. 1070 filed by the American Civil Liberties Union of Arizona and other groups. The three lawmen also gathered last week to watch a 9th U.S. Circuit Court of Appeals hearing to overturn a judge’s decision to halt four parts of the law from going into effect. Dever, who has testified before Congress on immigration-related issues on three separate occasions, has said he favors the law due to a provision that would require all law enforcement agencies to check immigration status.