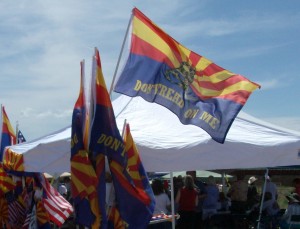 This story is from the Nation, and explores the coalition between former minutemen, militias and anti-immigrant groups under the umbrella of the the Tea Party movement. The Tea Party is becoming a big tent for these smaller, armed militias, hoping to win with ballots rather than bullets. One should hope that these groups have become supporters of the democratic process, rather than depending on Second Amendment solutions such as armed civilians hunting humans along the border.

In August of 2009, Al Garza, a leader in the anti-immigrant movement, left his post as vice president of the Minuteman Civil Defense Corps (MCDC), once the largest, richest and most politically connected border vigilante group in the country. In an email to supporters, Garza explained: “I do not see an end in sight for the problems plaguing what was once the greatest citizen movement in America.”

It had been an embarrassing summer for the group. A former member, Shawna Forde, was arrested and charged with murdering a Latino man and his 10-year old daughter in Arizona. Forde allegedly believed that she would find drugs and cash in the victim’s home, on a dirt road only a few miles from the US–Mexico border. Prosecutors contend that Forde was enacting a delusional plan to fund her breakaway faction–the Washington state-based Minutemen American Defense–by robbing Latin American drug cartels that she imagined were out to get her. The details about her fringe character that later emerged–her interest in starting an underground militia, her string of arrests for prostitution and petty theft, information from a co-defendant that her nickname was “White,” because “she hates all ethnicity with the exception of Caucasians”–further wrecked whatever credibility the Minutemen had.

The publicity surrounding the case enabled Garza to recruit hundreds, including former Minutemen, to an alternative group he soon created: The Patriot’s Coalition. “A lot of people felt, well, you’re a Minuteman, you’re a killer,” Garza told me, at a truck stop near his home in Cochise County, Arizona. “The name Minuteman has been tainted by organizations that didn’t want us at the border, that say we’re killers, that we’ve done harm.” Fortunately for Garza and others, their desire for reinvention coincided with a unique opportunity to do so–the emergence of the tea party movement on the national political horizon.

A few months before he broke with the Minutemen, Garza met Joanne Daley, his local tea party coordinator, at a tax day protest she had organized. Daley was a nexus of conservatism in Cochise County, spearheading health care reform town halls and a chapter of Glenn Beck’s 9/12 Project. When Daley met Garza, she said, “we … found out we had a lot in common, mostly outrage.” And when the time came for Garza to rebrand himself and his cause, he turned to Daley. She had expertise seeding nonprofits, developed through an old job with the state of Arizona. She registered Garza’s new group with the Arizona Corporation Commission, listing him as president and herself as a member of the board of directors…..