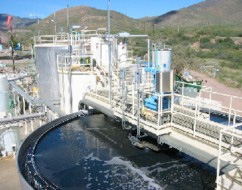 BioteQ reports a delay in the expected re-start of operations at its joint venture plant in Bisbee, Arizona. With the ramp-up of the bioreactor following re-inoculation earlier this spring, the company has discovered several air leaks in the bioreactor loop system, which were likely caused by freezing conditions in Arizona this past winter. BioteQ’s engineering and operating staff are presently making repairs and installing additional oxygen monitoring detection systems. Plant production remains suspended. The company will provide an update when the repairs are complete and the timing of re-start of copper production is confirmed.

“VANCOUVER – BioteQ Environmental Technologies Inc. (TSX:BQE) says the restart of its Bisbee operation in Bisbee, Ariz., has been delayed as the company repairs several air leaks discovered in its bioreactor loop system.

The Vancouver-based company, which provides technology and services for cleaning waste water from industrial and mining operations, said Friday that the leaks were discovered after an unexpected shutdown earlier this year.

BioteQ said it’s likely that the leaks were caused by freezing during the winter.

It noted that production at the operation remains suspended for the time being, while updates will be provided once the repairs are completed and a restart date is set.

Meanwhile, the company noted that it remains on schedule to begin water treatment at two plants in northern Quebec during the 2011 operating season, ahead of the spring snow melt.”