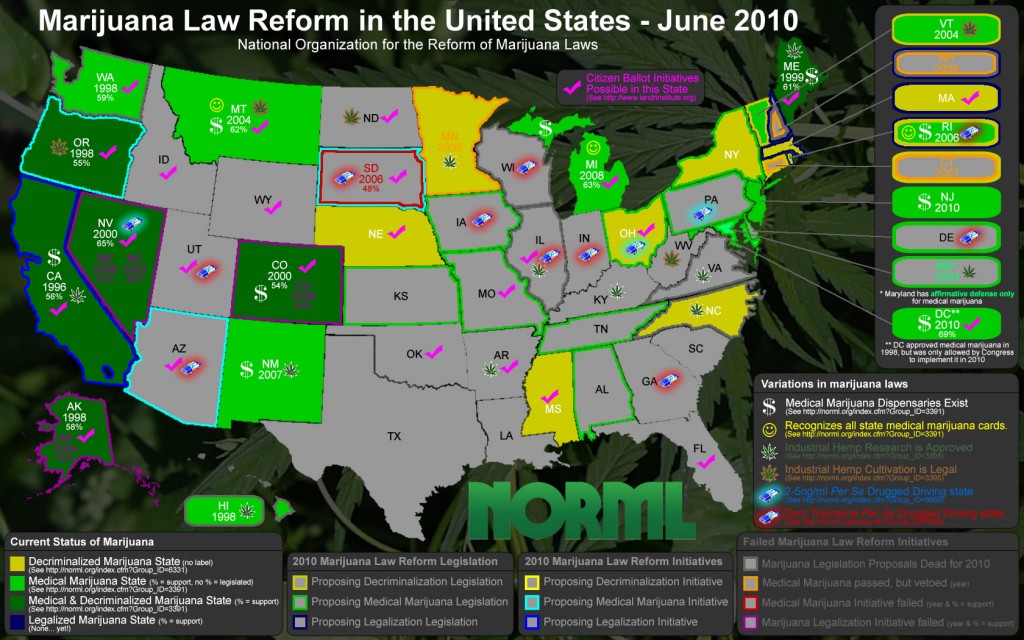 Gallup reports that, “A record-high 50% of Americans now say the use of marijuana should be made legal, up from 46% last year. Forty-six percent say marijuana use should remain illegal.”

President Barack Obama’s job approval has 53% disapproval, versus 43% who approve.

October, 2011 was the month that marijuana became more popular than the job approval of President Barack Obama.

Here is what the Obama administration has to say about this to those who want to reform the drug war:

What We Have to Say About Legalizing Marijuana

By Gil Kerlikowske, Director of the Office of National Drug Control Policy

When the President took office, he directed all of his policymakers to develop policies based on science and research, not ideology or politics. So our concern about marijuana is based on what the science tells us about the drug’s effects.

According to scientists at the National Institutes of Health- the world’s largest source of drug abuse research – marijuana use is associated with addiction, respiratory disease, and cognitive impairment. We know from an array of treatment admission information and Federal data that marijuana use is a significant source for voluntary drug treatment admissions and visits to emergency rooms. Studies also reveal that marijuana potency has almost tripled over the past 20 years, raising serious concerns about what this means for public health – especially among young people who use the drug because research shows their brains continue to develop well into their 20?s. Simply put, it is not a benign drug.

Like many, we are interested in the potential marijuana may have in providing relief to individuals diagnosed with certain serious illnesses. That is why we ardently support ongoing research into determining what components of the marijuana plant can be used as medicine. To date, however, neither the FDA nor the Institute of Medicine have found smoked marijuana to meet the modern standard for safe or effective medicine for any condition.

As a former police chief, I recognize we are not going to arrest our way out of the problem. We also recognize that legalizing marijuana would not provide the answer to any of the health, social, youth education, criminal justice, and community quality of life challenges associated with drug use.

That is why the President’s National Drug Control Strategy is balanced and comprehensive, emphasizing prevention and treatment while at the same time supporting innovative law enforcement efforts that protect public safety and disrupt the supply of drugs entering our communities. Preventing drug use is the most cost-effective way to reduce drug use and its consequences in America. And, as we’ve seen in our work through community coalitions across the country, this approach works in making communities healthier and safer. We’re also focused on expanding access to drug treatment for addicts. Treatment works. In fact, millions of Americans are in successful recovery for drug and alcoholism today. And through our work with innovative drug courts across the Nation, we are improving our criminal justice system to divert non-violent offenders into treatment.

Our commitment to a balanced approach to drug control is real. This last fiscal year alone, the Federal Government spent over $10 billion on drug education and treatment programs compared to just over $9 billion on drug related law enforcement in the U.S.

Thank you for making your voice heard. I encourage you to take a moment to read about the President’s approach to drug control to learn more.

Check out this response on We the People.

Stay connected to the White House by signing up for periodic email updates from President Obama and other senior administration officials.