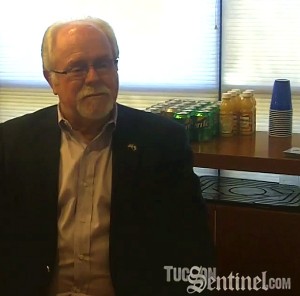 Today, Southern Arizonan and former Gabrielle Giffords District Director Ron Barber announced his candidacy for Congress in Arizona’s 8th Congressional District. Barber pledged to continue Gabrielle Giffords’ legacy of working across the aisle to solve problems for the people of Southern Arizona such as protecting veterans and seniors, investing in clean energy to create jobs and securing the border.

“Our community needs someone who will put politics aside and solve problems for the people of Southern Arizona,” Ron Barber said. “My commitment is to be honest with the people of this district and help restore civility to our public life. My first priority won’t be the next election – but the next generation. That means balancing the budget the right way by protecting Social Security and Medicare, creating jobs, and securing our border.”

Ron Barber served as District Director for Congresswoman Gabrielle Giffords from 2007 until she retired. At Giffords’ direction and under Barber’s leadership, the district offices focused on solving problems for veterans, military families, seniors, and any resident who experienced difficulty with the federal government. In January 2011, Barber was wounded alongside Giffords. After the shooting, he and his family created the Fund for Civility, Respect and Understanding to help the community heal by supporting survivors of the tragedy, aiding first responders, reducing bullying in schools, and increasing awareness of mental health symptoms.

Before working for Giffords, he ran the Arizona Division of Developmental Disabilities, where he built one of the top five programs in the nation that helped people with disabilities to get jobs and live successfully in their community.

Barber and his wife, Nancy, owned and ran a small business for 22 years. He understands the challenges faced by small businesses and will be an advocate for the changes that will make it easier for them to grow and thrive.

“My commitment is to work across the aisle, find common ground and restore civility to our politics so we can strengthen middle-class families of Southern Arizona,” Barber said. “My life’s work hasn’t been politics, it’s been about getting results and solving problems for people. I’ve been honored by the outpouring of support for our campaign. While there will never be anyone who can fill Congresswoman Giffords’ shoes, I look forward to continuing her legacy of putting problem-solving before politics.”

In announcing his campaign, Barber pledged to focus on balancing the budget the right way, by protecting Social Security and Medicare, creating jobs, keeping our promises to veterans and securing the border.

Courtesy of the Tucson Sentinel