On November 24th, The US  delivered three Black Hawk UH-60M helicopters to the Government of Mexico’s Federal Police Force (SSP), as part of the Merida Initiative to fight organized crime in Mexico.

From the US State Department: 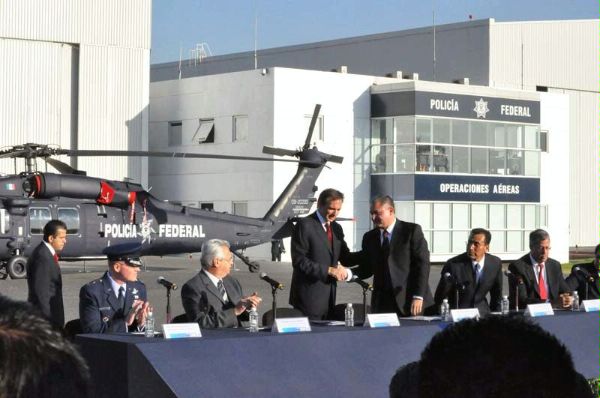 Today the Department of State delivered three Black Hawk UH-60M helicopters to the Government of Mexico’s Federal Police Force (SSP). These are among the most modern and effective helicopters in the world. Valued at $64 million, they mark the first Merida Initiative aviation delivery to the Mexican Federal Police and will complement the SSP’s current air fleet by expanding law enforcement operations, allowing for rapid response and increased mobility of law enforcement personnel, providing access to remote reach regions, and expanding interdiction operations to target illicit activities.

This delivery exemplifies the joint commitment made at the March 2010 High Level Consultative Group to implement “an ambitious multi-year initiative to broaden and deepen bilateral cooperation against transnational drug trafficking organizations and organized crime.” Despite the significant threat posed by transnational organized crime, through joint efforts, Mexico and the United States also have tools in our arsenal to fight back and provide greater security to both our countries.

The Government of Mexico has committed tremendous resources to combating transnational criminal organizations, and the support delivered by the U.S. today under the Merida Initiative will serve to strengthen the shared goals of citizen safety, security, and respect for the rule of law.

China Television NTD has the video:

The cartels are fighting to control lucrative drug routes throughout the country.

The state of the art helicopters are valued at $64 million dollars.

The gift is the first aviation delivery to Mexico’s Federal Police under the Merida Initiative. Established as law since 2008, the Initiative commits the U.S. to aid Mexico and Central American countries in security and combating drugs.

“Today we celebrate a very special advancement – the delivery under the Merida Initiative of some examples of the most advanced aerial technology to support Mexico’s Federal Police. These Black Hawk UH-60Ms are a tangible sign of the responsibility both countries share. This transfer is a sign of our commitment to Mexico to promptly act against criminals, to give better capabilities to Mexican forces so they can better serve the Mexican people.”

The helicopters were specially fitted for the needs of Mexico’s police force. They will be used to advance law enforcement operations, especially in remote areas that are otherwise difficult to reach.

“Mexico is going through a difficult time because of criminals who are trying to control territory, overtake communities and break the Mexican state. Today the criminal groups are in a process of being weakened and in degradation.”

According to the American embassy in Mexico, the U.S. has delivered more than $310 million dollars in equipment and training under the Merida Initiate to date.

The fighting between security forces and drug gangs, as well as clashes between rival cartels, has killed more than 31,000 people since late 2006. Foreign investors and Washington worry the violence could spill across the border into the U.S.