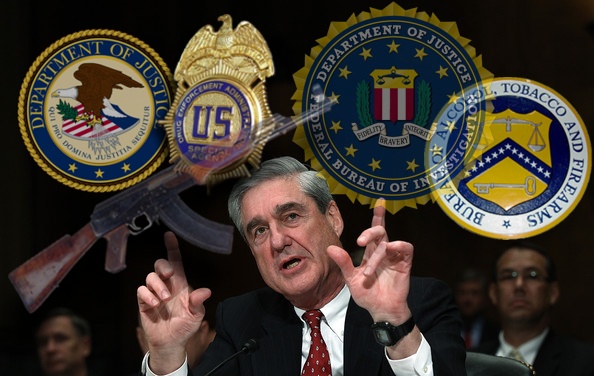 Molly Reilly reports that at a House hearing today, Mr. Mueller denounced and denied the claim of Representatie Darrell Issa (R-CA) that there was a third gun recovered that was linked to a federal informant.

Operation Fast and Furious, run by the Phoenix field division of the Bureau of Alcohol, Tobacco, Firearms and Explosives between 2009 and 2011, has come under harsh scrutiny in recent months. The program was implemented to investigate a gun-trafficking network in Arizona. Authorized buyers would purchase guns, smuggle them into Mexican drug cartels, and agents would then track where the guns ended up. However, agents in the program did not always make arrests or seizures right away, leading to the loss of hundreds of weapons.

Terry was killed in Arizona last December near the Mexico border. Two AK-47s, later linked to the Fast and Furious program, were recovered at the scene. Issa, who serves as chair of the House Oversight Committee, has publicly expressed that he believes there was a third gun involved.

When asked by Bob Schieffer of “Face the Nation” in October if he was insinuating that the FBI had tampered with evidence at the scene, Issa responded, “Well, we’re not suggesting that, but when you have tickets that are numbered two and three, and there’s no ticket one. In other words, the weapon — one weapon has a two, one has a three on it, there’s no one.”

He continued, “When agents who were at Brian Terry’s funeral made statements to his mother indicating that there were three weapons, when the two weapons that they have tested don’t conclusively match up, then you look and say, well, was there a third weapon at the scene?”

Mr. Mueller’s denouncement follows on correspondence from both Representative Issa and Senator Charles Grassley, who are investigating the Brian Terry murder with a partisan ability to cherry pick the facts while ignoring the link between law enforcement agencies, assorted enabling drug crimes and the prohibition of certain drugs.

“In recent weeks, we have learned of the possible involvement of paid FBI informants in Operation Fast and Furious,” Issa and Grassley wrote to Mueller. “Specifically, at least one individual who is allegedly an FBI informant might have been in communication with, and was perhaps even conspiring with, at least one suspect whom ATF was monitoring.”

Sources say the FBI is using the informants in a national security investigation. The men were allegedly debriefed by the FBI at a safe house in New Mexico last year.

Sources say the informants previously worked for the DEA and U.S. Marshall’s Office but their contracts were terminated because the men were “stone-cold killers.” The FBI however stopped their scheduled deportation because their high ranks within the cartel were useful.

In their July letter, Issa and Grassley asked Mueller if any of those informants were ever deported by the DEA or any other law enforcement entity and how they were repatriated.